Offer for the countries of Africa

Institute for integrative medicine for the countries of Africa offers following services and production:

- Information means of the complex help for correction of psychosomatic distresses;

- Information means of individual support and protection against stresses;

- Information means of the help at different kinds of mental dependence;

- Information and the software of social rehabilitation;

- Information and the software of restoration of working capacity.

At Institute for integrative medicine is used the newest · information technology for individual defense from stress and  · superfluous excitements.

Institute for integrative medicine carries out production information and program maintenance of mental information correction of problem states of patients with exhibiting’s of signs of depression, suicide behavior, neuroses and psychoses, psychosomatic distresses and vegetative distresses.

1. A complex of personal support into which information means of support of working capacity, activity and vivacity enter.

2. A calmness complex into which information means of minimization demobilization  emotions and intensifying of mobilizing emotions enter.

3. An antipavor complex into which information means of preventive maintenance of pavors and phobias enter.

Information production is the KNOW-HOW, is developed and pitched in operation for physical and legal bodies on the terms of conservation of a trade secret and protection of production against unapproved copying and a fake. 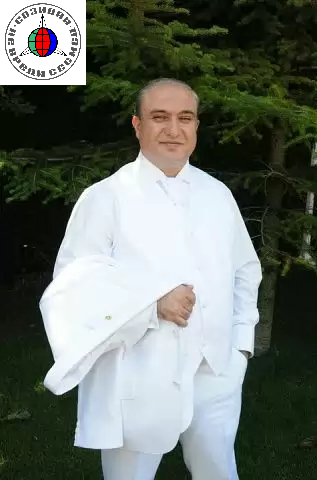 Supervisor of studies of institute:

Arabi Lotfi, the academician of the International academy of social technologies

As a part of institute the command of experts in following directions works:

Experts of institute use discursive  the approach to correction of behavioral distresses and emotional states, working capacity restoration.

A. V.Shabrov was born in 1943, in blockade Leningrad. In 1966 has ended 1st Leningrad medical institute of a name of academician I. P.Pavlova. In 1966-1968 — the clinical intern, in 1968-1971 — the post-graduate student, in 1971-1981 — the assistant, in 1981-1989 — the senior lecturer of chair of faculty therapy 1 LMI a name of academician I. P.Pavlova. Simultaneously, with 1982 for 1987 — the pro-rector on international contacts. Since 1989 — managing chair of polyclinic therapy of the Leningrad sanitary-and-hygienic medical institute  which in 1994 has been renamed into the St.-Petersburg state medical academy (S.PMA). In 1997 S.PMA I.I.Mechnikova's name has been appropriated. Now Shabrov Alexander Vladimirovich heads chair of hospital therapy with courses of clinical pharmacology, family medicine and clinical laboratory diagnostics S.PMA of I.I.Mechnikova. Since 1991 — rector LSGMI — S.PGMA a name Both. And. Mechnikova. With 2000 for 2006 was the representative of Ministry of Health of the Russian Federation in Northwest federal district.

Is one of leading scientists in the field of intrinsic illnesses and cardiology, the organization of primary medical aid, public health and public health services, preventive medicine. Has prepared 45 pupils, among which 15 doctors of medical sciences. The author and the co-author more than 400 printed scientific works, including 15 monographs’, 2 textbooks, 10 managements, 7 books. The owner of 50 patents of the Russian Federation on inventions and the co-author of discovering «the Phenomena Aqueous communications in aqueous systems». Is a member of board of Committee on public health services of the Government of St.-Petersburg; the trustee of the All-Russia therapeutic society and its St.-Petersburg branch; a member of bureau of preventive section of the Russian Academy of Medical Science; a member of presidium of Council of rectors of HIGH SCHOOLS of St.-Petersburg; the councilor of rectors of HIGH SCHOOLS of Northwest federal district Russian Federation; The councilor of the Senior Representatives of Partnership «Northern Measurement», a member of the District antinarcotic commission at the plenipotentiary of the President of the Russian Federation in Northwest federal district. The professor A. V.Shabrov is the editor-in-chief of magazine «the Bulletin of the St.-Petersburg state medical academy of I.I.Mechnikova», the associate editor of scientifically-practical magazine «Questions of quality management of medical aid», a member of Editorial Council of scientifically-practical magazine «Medicine. The XXI-st century», a member of an editorial board of magazine «Bulletin of the St.-Petersburg branch of the Russian academy of natural sciences».

Was born 2/29/1960 in Zhmerinka of Vinnitsa area. Russian. Having ended ВМА (1983) with distinction served on Northern Fleet in posts: the doctor of the therapist of a cruiser "Alexander Nevsky" (1983/85); the senior doctor of the expert (therapist) of ship bunch of specialized medical aid (1985/87). Rendered medical aid wounded and the patient of an international contingent in National Republic Angola (1986/87).

1987 - the younger research assistant (the doctor on functional diagnostics) NIL-7; the senior intern (1990/91), the teacher-chief of branch of resuscitation and intensive therapy (1991/95), the senior lecturer-chief 50The aboriginal The cardio logical branches (1995/98). From June, 1998 till April, 2010 the deputy chief of chair of naval and hospital therapy on clinical work (the deputy chief of therapeutic clinic on 160 cots by a medical part) Military medical academy  of S.M.Kirova. Since May, 2010 after dismissal from rows ВС the Russian Federation on achievement of age limit of a finding on military service works as the professor of chair of hospital therapy of the St.-Petersburg state medical academy of a name I.I.Mechnikova. Fulfils duties of the chief specialist of academy on the regenerative treatment and rehabilitation.

Has had training preparation concerning the organization of public health services and to quality assurance of rendering of medical aid as has specialization in "psychiatry" and "psychotherapy".

It is awarded the Diploma and the Award of the Government and Legislative Assembly of St.-Petersburg (1997) for the best design of use of scientific production in interests of municipal economy «Vegetative dysfunctions – the major problem of a modern society. The offer on introduction in St.-Petersburg new methodology of diagnostics and treatment Vegetative distresses».

International association of authors of discoveries to it gives away the Diploma on discovering «the Phenomenon of presentation against the prolonged action of small doses of radiances» (1998).

Is the ideologist and the developer of the concept complex medicine approved МЗ the Russian Federation (2001) and recommended in the form of new model of rendering of medical aid in Northwest Federal district Russian Federation. At its awake participation are created and Integration medicine» in the St.-Petersburg therapeutic society of S.P.Botkina (2004) work Inter-regional association Integration medicine (2001) and section«.

Under its management are executed doctor's and five master's theses.

Basic directions of scientific researches: cardiology, Integration medicine and the public health services organization, «a boundary pathology» and Synthesis of mental and somatic distresses in clinic of intrinsic illnesses, a professional pathology. The author of 219 published scientific works, from them: the discovering, two inventions; 39 articles in domestic and foreign magazines; 5 monographs’, etc. the Most significant compositions: Vegetative distresses. – SPb.: Gippokrat, 1999. – 176 with.; Stress. Vegetative distresses. Synthesis of mental and somatic distresses (Integration medicine). – SPb.: А.В.К., 2002. – 384 with.; Integration medicine: a path from ideology to public health services methodology. – SPb.: Nordmedizdat, 2007. – 426 with.

Yunatskevich Peter Ivanovich (1970 of the river). Has concluded Military engineering-space institute of a name of A.F.Mozhaisk on a command specialty. Passed military service in Rocket strategic forces and Military-space forces of Russia occupying various command, scientific, medical and pedagogical posts. Was engaged in scientific maintenance of preparation and a direct professional training for Rocket strategic forces, Military-space forces, the Leningrad military district, the Leningrad naval base. A military rank: the colonel, personal number: У-349729.

Has developed methods of military-professional selection and support of shots, moral and psychological maintenance of armies in the conditions of nonpredatory and a wartime, prepared military-pedagogical shots and raised qualification of command composition of armies.

Has led the essential contribution to building of psihologo-pedagogical system of preventive maintenance of suicides to armies, the author of the computerised systems «an automated workplace of the military man суицидолога» - VICK'S main scientific result of A.F.Mozhaisk for 1997.

Conducted scientific and practical works in 31 branch of the St.-Petersburg psychiatric hospital of Skvortsova-Stepanova, 27 and 28 (psychiatric) branches of 442 District military-clinical hospital of Z.P.Soloveva, on chair of naval and hospital therapy of Army medical college of С.М. Kirov, in 32 city hospital of St.-Petersburg. Was engaged in correction of suicide behavior, preventive maintenance of psychosomatic diseases, depressions and behavioral distresses at persons of different age.

One of authors  of new ideology of public health services «integrative medicine», developed in St.-Petersburg since 2000 under the direction of the Minister of Health which essence consists in synthesis of pedagogical, medical and psychologic preparation of medical shots for treatment and rehabilitation of patients with сочетанной a pathology (somatic, mental distresses, antisocial behavior or crimes against public morals).

Since 1997 the candidate of pedagogical sciences on a speciality 13.00.01 – the general pedagogics, formation and pedagogics history. A dissertation theme: «Psihologo-pedagogical diagnostics and correction of suicide behaviour of military men».

For 5 years of scientific and pedagogical work in the Ministry of Internal Affairs has developed technology of counteraction of corruption, has shown new approaches in work with administrative bands, has scientifically described a phenomenon of social parasitism and aggressive ideology-technology of "supermoney power". It when the purpose of the social subject – money, means of achievement of the purpose – too money. If the purposes and means coincide, there is a superpower phenomenon: social subjects passively or awakely react on overall objective achievement – enrichment at any cost.

Scientific maintenance of counteraction of corruption on the basis of technologies of public control, public investigation, public discussion and public condemnation has been supplied on arms nearby state and public organisations of Russia.

Since 2007 under the invitation of law-enforcement sociability heads a series of anticorruption designs in Russia as the main adviser (www.cobrac.spb.ru).

Since 2006 rendered scientific and organizational assistance to the Deputy of the State Duma of Russia Shestakov Vasily Borisovichu in rehabilitation of concept "socialism" and working out of new socialist ideology – «a moral socialism». The regenerated version of socialist ideology has been taken over by political party «Fair Russia», since 2007 in Russia have begun the start the socialist congresses and forums (www.in-socialism.spb.ru).

It was selected the Candidate of the State Duma in 2008.

Since 2009 heads Institute of social technologies (www.iovpani.spb.ru), participates in the organisation of execution of the Plan of measures on realisation of the Concept of a development of education of adults (www.cisedu.spb.ru).

Has more than 200 proceedings, 10 monographies, carries out a scientific management of doctor's and candidate dissertational works.

In 2009 it is selected by the full member and the Vice-president of Petrovsky academy of Sciences and arts (www.pan-i.ru).

1. The theory of ideological maintenance of the global and local organizational, economic and civil processes, received the name «ideology of morals» is developed. A theory essence are reduced to a communication establishment between the category "damage" (harm) in details described in the theory of the right and legal certificates, and the category "morals" reflected in article 55 of the Constitution of the Russian Federation. With reference to itself in a state to estimate a damage each citizen. If morals to perceive Not drawing the person of a damage to itself, a society, the state, inhabitancy then each citizen in a state to estimate morals (harmlessness for itself) action or inactivity of any social subject (the citizen, bunch, the state etc.) . In process estimating morals of social subjects moral education and development of citizens, bunches and any organizational, economic and civil frames which are taking part in procedures of mass moral or ethical estimation is carried out.

Integrativnaja medicine - a direction of rendering of medical aid by the problem patient from systems approach positions to diagnostics, treatment and preventive maintenance of a complex pathology.

1. Complex research of a mental and somatic state of the patient, definition of actual distresses, their hierarchies, interrelations and interconditionality.

2. Working out of the dynamical medical tactics based on results of complex diagnostics and oriented on systems approach to treatment of a pathology.